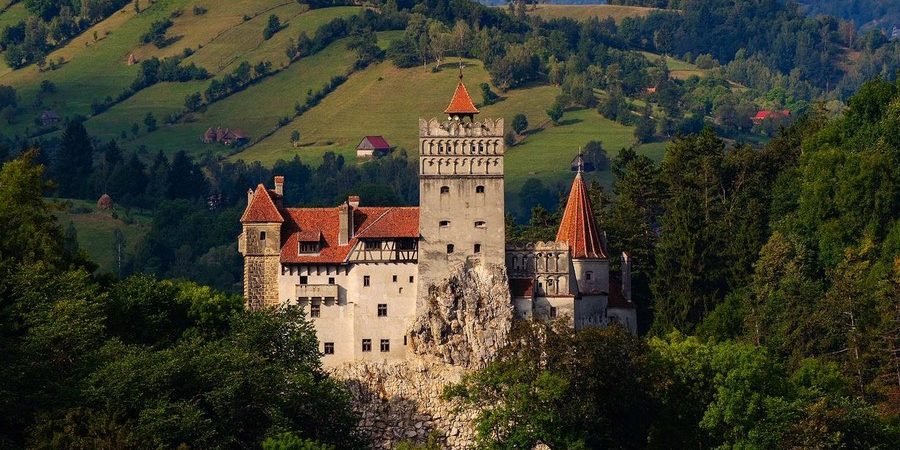 Bran Castle is one of the most imposing historical monuments of Romania and is located in Bran-Rucar Pass, about 30 kilometers from the city of Brasov.

Bran Castle is built on a rock and houses the Bran Museum, which lies on the four floors of the castle.

With a history of more than 600 years, Bran Castle was documented by an act issued on 19 November 1377 by King of Hungary, Ludovic I of Anjou. By this document, the people of Brasov were given the privilege to build a stone fortress at Bran.

Saxon legends claim that the order of the Teutonic Knights is the one that would have built the fortress of Bran at the beginning of the thirteenth century, in the short period when they mastered the Land of Barsa (1211-1225).

The fortress also had the purpose of controlling the most important entrance to Transylvania, which was called the Road of the Ban or The Royal Road. In the Middle Ages, the garrison of the fortress provided the protection of the royal customs, moved with the rise of the fortification from Rucar to Bran. Among the customs of Transylvania, the customs of Bran brought the king the highest receipts.

For a very short period (1412-1418), Bran Castle was ruled by Prince of Wallachia, Mircea the Elder.

People of Brasov, who built the fortress of Bran, were first interested in effectively protecting the passers-by for the safety of commercial traffic and, last but not least, in eliminating the abuses of the royal castle owners and customs officers. In order to solve these problems, the safest solution was to pass the fortress under the control of a person named by them.

“In 1498, Brasov, one of the richest Transylvanian cities, takes advantage of the collapse of King Vladislav II’s Iagello’s treasure, and obtains for a loan a 10-year pawn of the fortress and Bran” with the condition to conserve the fortress always by faith, by its own means and expense, to strengthen it and to fortify it as much as possible “.

The possession of Braşov on Bran was taken over after the conquest of the Hungarian kingdom by the Ottomans, through a series of understandings concluded with the principles of Transylvania. Moreover, in 1651, the Brasovians obtained the right to property, through a sale-purchase contract concluded with the prince of Transylvania, Gheorghe Rákoczi the 2nd.

Today, in one of the chambers of the castle, it is arranged a “Bram Stoker” room, where is presented the Legend of Vlad the Impaler (also known as Vlad Dracul), as well as the Dracula myth.

Dracula, the character of the novel with the same name written by the Irishman Bram Stoker at the end of the nineteenth century, is a Transylvanian Count, master of a high castle somewhere on the top of a cliff, from where the valley of the river winds through the Principality of Transylvania. He is often confused with Vlad Tepes, the prince of Valah, the prince over the castle, in the Principality of Wallachia. As Bran Castle is the only one in Transylvania that corresponds to Bram Stoker’s description, the whole world refers to it as Dracula’s Castle.

Bram Stoker has never visited Romania. In the description of Dracula’s imaginary Castle, he starts from a presentation of the Bran Castle available in England at the end of the nineteenth century. Indeed, the castle, as it appears in the engraving printed in the first edition of the novel “Dracula”, looks remarkably well with Bran Castle, and only with it. Moreover, it is suspected that in describing Dracula’s Castle, Stoker used Bran Bran Castle’s illustration of Charles Boner’s work “Transylvania: Its Product and Its People”.

Dracula, as he is perceived today, is a fictional character. His name derives from the nickname given to Vlad Ţepeş, Prince of Wallachia between 1456-1462 and in 1467, which, for political reasons, the historians of the time describe him as a ruthless and thirsty despot.

Ezio Team recommends you to discover the history and mysteries of the legendary castle on a visit to Brasov and to let yourself impressed by its incomparable beauty.

This site uses Akismet to reduce spam. Learn how your comment data is processed.