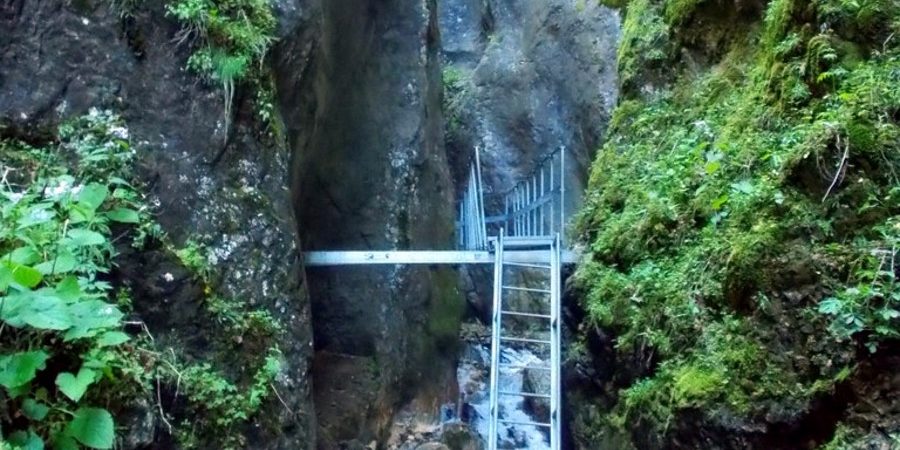 The mountain resort Timisul de Jos is a real jewel of nature where you can lose yourself by contemplating forever fir trees and rivers of crystalline water. Clean air, breathtaking poisons and special natural landscapes delight tourists who choose to spend unforgettable moments in the resort.

Timisul de Jos is the perfect starting point for the famous Seven Stairs, a unique touristic route. Climbing is done through a rocky gorge, on newly-built iron ladders. A superb drop of mountain water complements the scenery throughout the 7 Stairs, which is the final destination of the massive Piatra Mare.

The Seven Stairs Canyon is located on the Sipoaia Stream Valley and next to the Tamina Canyon, are the main tourist attractions of the Piatra Mare Massif. It is located about 10 kilometers from Brasov, one of the most beautiful medieval towns in Transylvania.

The canyon is actually a 160-meter-long cave with a length of 160 m and a level difference of 60 m. There are seven waterfalls, the highest being 35 m. The canyon route is equipped with metal ladders and underpants , but it has to be done with great care. It consists of ten steps with heights between 2.5 and 15 meters, transformed into cascades through the water volume of the Seven Scales stream, a left tributary of Sipoaia.

In the full season, on a weekend, there are around 1000 -1500 people visiting this tourist area.
Along the road from the barrier to the canyon, there are 21 tyrols. Adrenaline-eager tourists can enjoy the two-mile tire, which has a trail crossing the so-called cascade of living water.

It’s amazing what nature can do. Seven Stairs Canyon has been visited for a very long time, and at the beginning of the 20th century there were 7 wood stairs, from which the current name comes. There are still signs of people’s passing.

The Seven Stairs Canyon was first set up between the 1920s and 1930s when the first stairs were installed to make it easier to access the gorge. At the beginning of the 70’s, several stairs were installed, and in 2002 all bridge-bars with some of the metal were replaced. In 2013, Seven Stairs Canyon was reopened after the entire assembly was completely rehabilitated along with the forest road on the Sipoaia Valley between Dambu Morii and the entrance to the canyon.

Ezio Resort, located in Timișul de Jos, offers you 27 comfortable rooms to take refuge after a day full of adventure.

This site uses Akismet to reduce spam. Learn how your comment data is processed.